As might have been expected already in the run-up to the event, the Italian team with two-time World champion Marco Gradoni, defending European champion Alex Demurtas, European bronze medal winner Lorenzo Pezzilli as well as top placed World championship sailors Davide Nuccorini and Alessandro Cortese won the 31st edition of the optimist team cup. Whereas strong individual fleet race sailors not necessarily make up a strong team, the Azzuro squad, in addition to their superior boat speed, also demonstrated all the special abilities required for this very special form of sailing like complex tactical interplay in an almost perfect fashion. The only upset they suffered during the championships was in the qualification round against the cup defender, team USA 1 from the Lauderdale yacht club. 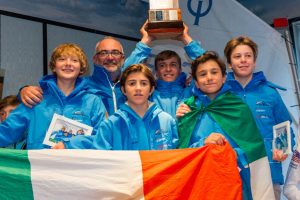 They won all their races in the gold group, but had another close race in the first run of the Grand final against the team of Poland, which they managed to win on tied points after a very exciting course of events. In the second run of the final Team Italy secured the cup, leaving the team of Poland, who displayed great sportsmanship. as an unlucky runner-up for the second time in a row.