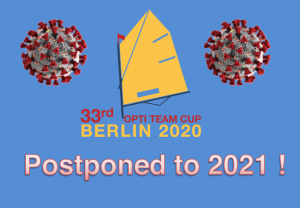 In its last the organizing committee of the International Optimist Team Cup (OTC) at the Potsdamer Yacht Club, in coordination with the board of the Yacht Club, has decided that the 33rd edition of the Team Cup, originally scheduled for October 23rd to 25th of this year, will be postponed to 2021.

A number of reasons have ultimately led to this decision, which was quite difficult for us.

Due to the SARS-CoV-2/COVID19 pandemic, there are currently almost daily new travel regulations and restrictions, not only worldwide, but also within the European Union. The extent of these restriction is currently unpredictable and is likely to greatly impair the international character of the OTC.

The accommodation of the sailors with host families of the Potsdam Yacht Club and the social events in the club, which in the past contributed significantly to the attractiveness of the regatta, cannot be offered due to the currently valid SARS-CoV-2 regulations. Other affordable accomodations may also be restricted.

So far, only very few teams have given us a feedback or a definitive commitment as a response to our second and third invitation to the regatta in June and August. This is certainly partly due to the fact that the European Championships for Optimists have been postponed to a date, which overlaps with the OTC date. For the OTC, however, there are no alternative options from the Berlin regatta calendar.

Thus in the present situation, we would not be doing the sailors, coaches, supervisors and companions or ourselves as organizers a favor if we stick to this year’s date.

We firmly hope that the worldwide situation regarding SARS-CoV-2 / COVID19 will relax by autumn of next year and we look forward to welcoming many of you to the 33rd OTC in 2021, which will again be scheduled for the end of October.

Best regards and please stay healthy in these difficult times.